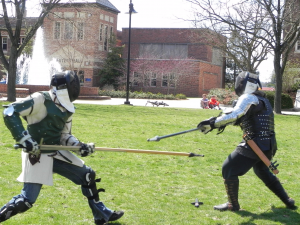 King Longfellow and Dominique Saunders pair off on Stine Lake during a friendly spar at a Fencing Club event last Saturday. Saunders won a silver medal the week before at Wilson College where the club participated in the annual Joyce Donatelli Invitational.

The College’s Fencing Club traveled to Wilson College on April 7 for the Joyce Donatelli Invitational. This competition is the second individuals competition that the Fencing Club has participated in since last spring.

It was a big day for the Bullets as they ended the day with more medals than any other school. Junior Kenny Anderson won the gold medal for saber fencing and his teammate Sophmore Ian Moslet won the bronze.

Sophomores Ian Moslet and Johnny Santacruz and Junior Darcy Merrill helped organize the event in what was ultimately a massive success for Gettysburg College.